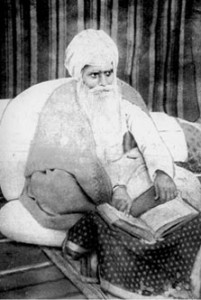 According to Namdhari ‘history’, Sri Guru Gobind Singh escaped from Nander in 1708 and in the form of “Baba Ajapal Singh” lived in Nabha.  In 1812, according to the Namdharis, Baba Ajapal Singh travelled to Hazro and appointed Baba Balak Singh, who would then have been of the age of 13 years old, as his successor.  That would mean Sri Guru Gobind Singh lived to the age of 146 years.  Of course, no Gurdwara exists to mark his final journey or where he left his body for Sachkhand.

From a purely logical point of view, it is impossible to accept that Sri Guru Gobind Singh would have spent 91 years living in secrecy with no contact with his Sikhs and then appointed a successor without announcing it to the Sangat.

Further, it would mean that according to the Namdhari version of history, Sri Guru Gobind Singh would have lived through the massacre of Sikhs in the Ghalugharas, the execution of his Bhai Mani Singh, Bhai Taru Singh, the final battle of Baba Deep Singh and many other events in Sikh history.

Even further, it would make Guru Gobind Singh a contemporary of Maharaja Ranjit Singh and the Khalsa Raj.  Maharaja Ranjit Singh had once made a call for anyone in his kingdom who had so much as seen Guru Gobind Singh.  He found one old Muslim man whom he met with bare feet and whose eyes he kissed.  Imagine if the Guru was in fact still alive!  Someone would have known to tell him.  But because this story is a complete fabrication, no such meeting c0uld have possible taken place.