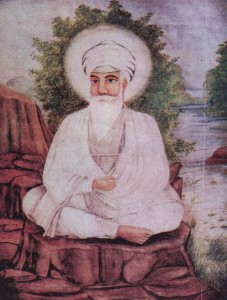 The Sikh community was in a state of turmoil after the fall of the Sikh Kingdom.  At that time, serious dilution had taken place in Sikh traditions and there was great confusion. Several groups claimed to be successors to Sri Guru Gobind Singh.

It was given out by some of the followers of Baba Sahib Singh Bedi of Una (1813-1891 Bk., A.D. 1756-1834) that he was an incarnation of Guru Gobind Singh having been born, according to a promise given by the Guru to Baba Kaladhari, in the family of the latter. Baba Sahib Singh’s father Ajit Singh was the son of Baba Kaladhari. According to a statement of Bhai Lal Singh of Amritsar, a Gurbhai of Baba Ram Singh Namdhari – both being followers of Baba Balak Singh of Hazro – Bhai Maharaj Singh of Naurangabad  was the second incarnation of Guru Gobind Singh, while Baba Ram Singh (1816-1884) was the third.

One Bhai Harnam Singh of village Ubba-Mandi in the Patiala state, also, in those very days, proclaimed himself to be Guru Gobind Singh. It may be stated here that Baba Sahib Singh Bedi, Bhai Maharaj Singh, Baba Sarup Singh, Baba Balak Singh and Baba Ram Singh never put forward any claims for themselves. There is nothing on record in their own hand or under their seals or signatures to show that they ever claimed or proclaimed to have been the avtars or incarnations of Guru Gobind Singh or to have been nominated by him as his successor-Gurus. They were all educated people and had not to depend upon others to do it. On the other hand, whatever direct documentary evidence is available, it unequivocally declares that they were theSinghs of the Guru and were his unflinching devotees throughout their lives.

In fact, according to the tradition in the Bhagat family of Rawalpindi, Bhai Balak Singh, from whom Baba Ram Singh received the nam-dan, had received Gur-mantra from Sain Sahib Bhagat Jawahir Mall. This finds substantial support in the letter of Baba Balak Singh dated Maghar 18, 1919 Bikrami, December 1, 1862, from Hazro addressed a day before his death to Bhai Sahibji Sainji Jawahir Mall for whom he shows the highest of respect and deepest of devotion, becoming of a disciple towards his guide.

There is also a reference to this letter in Bhagat Lakshman Singh: Autobiography, pp. 5-6, saying:

In the letter that Bhai Balak Singh wrote to Sain Sahib on Maghar 18, 1919 Bk., December I, 1862, some time before his death, he remembers him as if he was Sain Sahib’s disciple, and the style and tone of the letter were highly reverential. The Namdharis, followers of Baba Ram Singh, Keshadhari and Sahjdhari both living in the Attock district and in Swabi Tehsil of the Peshawar (now Mardan) District, worshipped the memory of Sain Sahib even so late as 1889 when I was the Head Master of the Municipal Board School, Hazro. I was 26 years old at the time. The consideration with which I was treated by all that was good there was simply surprising particularly when it is borne in mind that I was not a grandson of Sain Sahib, but that of a brother of his.

The venerable Bhagat Lakshman Singh was a grandson of Bhagat Sohna Mall, the younger brother of Sain Jawahir Mall. He had personally known Bhai Kahan Singh of Hazro, the nephew of Baba Balak Singh and a Gur-bhai of Baba Ram Singh, and also Bhai Dhani Ram, the Namdhari suba for Swabi and Attock. He constantly met them in 1888-1889 at the house of Bibi Poorbo, the adopted daughter of Sain Jawahir Mall. He tells us in his note of February 19, 1935, that he had not heard the name of Baba Ajapal Singh from anyone of them.

The truth is that the fable of Baba Ajapal Singh’s association with Bhai Balak Singh had yet to take some three decades and a half to suggest itself to the imagination of its creators. His name, therefore, could not have been known to the immediate descendants and followers of Baba Balak Singh. It was not known to Bhai Lal Singh of Amritsar, the second Gur-bhai of Baba Ram Singh, nay, not even to Baba Ram Singh himself who in his entire correspondence consisting of over five dozen letters makes no mention of Baba Ajapal Singh at all, much less of his having met and blessed Baba Balak Singh.

The official records of the Government of the Panjab and of the Government of India, who had set up a strong network of spies to get at every detail of the origin, growth and development of the Kuka movement at all its centres – at Hazro, Amritsar and Bhaini -are absolutely silent about Ajapal Singh. The Government had successfully traced the connection not only of the Jagiasi-Abhyasis of Hazro with the Kukas of Bhaini but had also gone a step further in tracing the relationship of Baba Balak Singh, the first prominent leader and originator of the Namdhari movement, to his preceptor Sain Jawahir Mall and placing his sons Bhagat Hiranand and others under police surveillance after a number of Kukas had been blown away from the guns at Malerkotla and Baba Ram Singh had been deported to Burma in January 1872. This surveillance continued for a long time and Bhagat Hiranand and his brothers were not only not allowed to move out of their town but had also to report their presence every day at the local police station.

Even after the death of Baba Balak Singh on Maghar 19, 1919 Bk., December 2, 1862, BabaRam Singh looked upon the sons of Sain Sahib Jawahir Mall – Bhagat Hiranand and his brothers with deep reverence and appealed to them in his letter of Assu 1922 Bk.,A.D. 1865, for help in relieffrom Government harassment by telling them that he (Ram Singh) was their sewak.

The letters of Baba Balak Singh and Baba Ram Singh themselves, conclusively proving their close relationship with Sain Jawahir Mall, it is preposterous to expect students of history to believe in the fable of Baba Ajapal Singh blessing Baba Balak Singh with Guruship.

If Ajapal Singh had any direct or indirect connection with Balak Singh at any stage in his life, it could not have escaped the investigations of the Panjab Police. And his successors Baba Sarup Singh and Narain Singh would as well have received the attention of the Panjab Government like the sons and successors of Sain Jawahir Mall as mentioned above. The headquarters of Baba Ajapal Singh’s successors at Nabha were much nearer to Bhaini in the district of Ludhiana than Hazro in the far off northwest of the Panjab. In spite of it, Baba Sarup Singh and Narain Singh ofNabha were free from Government suspicion. This speaks for itself.

Baba Ajapal Singh, evidently, had no connection with Baba Balak Singh. There is no evidence to suggest it. The Gur partap Suraj Granth of Santokh Singh, the Pothi Gurbilas Ki of Mahant Bawa Sumer Singh and the works of Giani Gian Singh-the Panth Prakash and the Tawarikh Guru Khalsa make  no mention ofAjapal Singh. Even Bhai Kahan Singh of Nabha, the father of many an indirect dubious suggestion about Baba Ajapal Singh, is silent about his meeting and blessing Baba Balak Singh. On the other hand, in his anonymous article on Sikh ltihiis da an-likhai patrai published in May 1816, Bhai Kahan Singh who, according to Bhai Takht Singh, was the author of the article, tells us that during his last moments Baba Ajapal Singh nominated Baba Sarup Singh to be his successor, saying: “This is Bhai Sarup Singh, consider him to be my very self, he has done (me) great service. I install him in my place”

The article referred to above was written and published within a few days of the death of Bhai Kahan Singh’s father Bhai Narain Singh on Baisakh 20, 1973 Bk., May 1, 1916. Bhai Narain Singh, son of Bhai Gurdial Singh, was the grandson and successor of Baba Sarup Singh, the great-grandfather of Bhai Kahan Singh. With the nomination and installation of Bhai Sarup Singh as his successor by Baba Ajapal Singh himself just before his death in A.D. 1812, the question of the appointment of anyone else, including Bhai Balak Singh, as the successor of Baba Ajapal Singh does not arise. This knocks out all ground from under the story put up by the Namdharis and reduces it to nothing more than fiction.

We have available to us the Pothi Sardha Puran Bhai Balak Singh ji ki Siharfi written and published by one of his devoted disciples, Bhai Shauqa Ram, in 1869 (completed on Bhadon Sudi 15, Puran-mashi, 1926 Bikrami, September 20, 1869), within seven years of the death of the saint on December 2, 1862. It was also later on published by Sardar Shamsher Singh Ashok in the Panj Darya, Jullundur, for October 1957. With all his overflowing devotion for his worshipful master, Shauqa Ram, throughout the Pothi, remembers Baba Balak Singh as Bhai or Bhai Sahib. With the same respectful word, he mentions Baba Ram Singh Namdhari who is recorded therein to have met at Wazirabad, on the bank of the river Chenab, the procession of the ashes of Bhai Balak Singh being taken to the Ganges at Hardwar. It is apparent, therefore, that the use of the word Guru for Bhai Balak Singh or for Bhai Ram Singh had not yet been introduced into the Jagiasi-Abhyasi or Namdhari followers of these saints. It came later and was, evidently, an innovation unauthorized by Bhai Balak Singh.

The story of Guru Gobind Singh having blessed Baba Balak Singh and through him, Baba Ram Singh, with Guruship is as baseless and historically as incorrect and untenable as the suggestion of Baba Ajapal Singh of Nabha being Guru Gobind Singh having lived for one hundred and four years after his death at Nanded in October 1708. There is no evidence of any of the two having ever met Bhai Balak Singh.

Sardar Narotam Singh, Barrister, however, tells us in clear words that he had written his articles published in the Khalsa Samachar of August 1 and December 5, 1940, with a view to placing before his readers true facts about these saints and disabusing the minds of those who might have been misled by the Namdhari Itihas. These facts, said he, could be verified from Bhagat Bishan Das (grandson of Sain Jawahir Mall) who was then living at Rawalpindi and was about eighty eight years old. Both Bhagat Lakshman Singh and Sardar Narotam Singh, by virtue of their close relationship with Sain Sahib’s family, were decidedly more knowledgeable than the author of the above book, and their statements are, without doubt, more truthful and reliable. The fact, as we have it from them, and is also supported by the letter of Bhai Balak Singh himself, that Sain Jawahir Mall,and not Baba Ajapal Singh, was the preceptor  of Balak Singh.

According to Bhai Kahan Singh, Baba Ajapal Singh at no stage figured in the rise and development of the Namdhari movement. All that was known to him about Ajapal Singh from 1754 (1811 Bk.) to 1812 through his father (1861-1916), based on the information of Baba Sarup Singh (1812-1861), has been recorded by him in his articles on the subject. There is no mention anywhere in them, or in his earlier or later works, of Baba Ajapal Singh having ever met Bhai Balak Singh. Baba Ajapal Singh has been introduced into the life-story of Bhai Balak Singh by Namdhari publicists obviously to push back the date of the origin of their movement to the beginning of the nineteenth century or to the first decade of the eighteenth century when Guru Gobind Singh died at Nanded in 1708, or, perhaps, to a still earlier date, the last decade of the seventeenth century, when the Guru created the Khalsa in 1699. But all this can suggest itself to the fictionists and not to the votaries of objective history.