According to Namdhari beliefs, although the five kakaars are mandatory, the kirpan of full size is no longer mandatory.

Kirpans of original size were required in that time due to war times and the Hukam of Guru Gobind Singh Ji. For Namdharis, now the Kirpan is wrapped into the Kanga according to our Satguruji’s Hukam. Satguru Ram Singh threw his gun into river Sutlej at Harike after the British

conquest of Punjab and remarked that freedom and peace will be won by the rosary, and thus began the Non-Co-operation

The Khalsa has always worn two kirpans:  one small one (generally around 9-12 inches in length) that is always worn day and night and the other is a large two and a half or three foot kirpan which was worn during battle.  The kakaar was always considered the smaller kirpan which never departed the body. 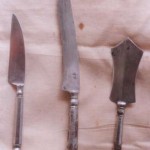 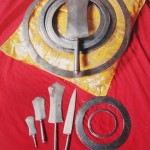 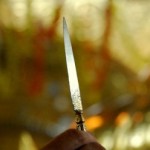 But by reducing the kirpan to a mere symbol, the Namdhari samparda have abandoned an essential rehit.

At the time the Namdhari samparda was evolving, there were strict restrictions on the kirpan imposed by the British. The right to wear the kirpan was denied to Sikhs under the Indian Arms Act (XI) of 1878. Under this Act, no person could go armed or carry arms, except under special exemption or by virtue of a licence. Whatever could be used as an instrument of attack or defence fell under the term “Arms.” Thus the term included firearms, bayonets, swords, dagger heads and bows and arrows. Under the Act, a kirpan could be bracketed with a sword.

According to Joginder Singh’s book Namdhari Guru Ram Singh, “when the British Government imposed restirictions on carrying kirpan, he [Baba Ram Singh] advised his followers to keep a heavy lathi in place of kirpan.”

Under these circumstances, many Sikhs, not just Namdharis, began to wear the kirpan as a symbol in the kangha.  But that having been said, many Khalsa continued to maintain the full kirpan.

After winning the “Kirpan Morcha” against the British and securing the right to freely wear the kirpan, the tradition of wearing the kirpan at all times continues in the mainstream Khalsa. It has however, ended for the Namdharis.

Without a shastar and specifically their kakaar the kirpan, how can Namdharis claim to be following the traditions of the Khalsa and the orders of Sri Guru Gobind Singh?