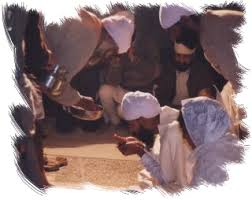 As is mentioned elsewhere on this site, the Namdhari samparda has abandoned the Kirpan in violation of Sri Guru Gobind Singh’s maryada.

But this is not the only Namdhari deviation from traditional Khalsa maryada.

The Namdhari sampardai has relied on Prem Sumarag Granth as its foundational document.  This is a text that originated, according to Bhai Kanh Singh Nabha in 1823 or 1828 AD.  It includes amongst other features many Santanists practices such as those of Havan, yug, etc.

Baba Ram Singh had sent Bhai Rai Singh to Hazur Sahib to learn and record the maryada there so that it could be adopted by the Namdharis.  Oddly, if Baba Ram Singh had claimed to be or was the successor to Sri Guru Gobind Singh, one would expect he would have known the correct maryada and not needed to send anyone to record or confirm it.

Although the Namdhari movement started off well, with time, many impurities have crept in.

Whereas Amrit Sinchars and giving of Gurmantra have always been done in secluded areas after meeting with the Punj Pyare and establishing whether one is worthy of this gift, Namdharis regularly prepare and distribute “amrit” in open settings and without any serious scrutiny.  The preparation and administration take place where anyone can observe.

Furthermore, it is known and practised by all Jathas in the Khalsa Panth that only sarbloh can be used for amrit sinchars.  Sri Guru Gobind Singh himself first used Sarbloh bata and khanda to prepare amrit.

Namdharis were also strict in their observance of sarbloh in both amrit sinchaars and their langars.  With time however, the use of steel and brass has become common and sarbloh is nowhere to be found in the Namdhari tradition.

The power of Sarbloh has been recorded by Sri Guru Gobind Singh in Sri Akal Ustat:

Sadly, the Namdhari tradition has abandoned this fundamental rehit as well.