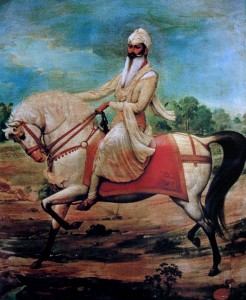 It is true that some of the followers of Baba Ram Singh had taken to the practice of some of the Bedis and Sodhis and, in their excessive zeal, had started calling him Guru. It is also true that Baba Ram Singh had come to entertain some belief in the predictions of the Sau-Sakhi or One Hundred Stories about Sikh Gurus and hoped for the re-establishment of the Sikh rule in the Panjab.

On the question of his Guruship, however, he knew it for certain and had no doubt in his mind that he was not a Guru in succession to Guru Gobind Singh. Like a true saint and a noble soul that he was, he repudiated it in clear words whenever he was referred to as Guru by his followers. He wrote to them again and again in his letters, declaring and praying:

…Make me, O Lord, always obey that Commandment of yours that You, having assumed the form of the Guru, have issued in the Guru Granth Sahib.

…Save me always, O Lord, from faithlessness (be-mukhi). Be-mukhi means to turn away from the order of the Guru …

What have I to say? This has been said in the Guru Granth Sahib throughout. Man’s is only to beg. The granter is the Guru…

...The order of the previous ones is also the same that All-powerful have been the Ten Gurus. I also proclaim their commandments. I am not the Guru...(5)

Jwala Dei, you should be busy with meditation night and day and recite the Guru Granth Sahib always....(17)

...Do not write any letter to Dalip Singh. He has eaten beef. What can he do for us? Apply to the Guru. Why apply to anyone else?

.. .If I had any (hidden) power, why should I myself have been put in prison....All powers are in the divine Name and in the Guru. So meditate on Him. The Guru of Gurus is the Guru Granth Sahib. Wherever anyone will recognize the Word-Guru there shall come all goodness. Know this to be true (18).

.. . I have no desire to become Guru, nor I am the Guru. I am only a Hukmi-banda (an obeying man). People have unnecessarily raised opposition to me.... (21)

...Again and again pray to the Guru:·O Guru, have your command obeyed which you have recorded in the Guru Granth Sahib.·

...See the ways of the Lord Creator and what he brings about.

...The Guru Granth Sahib alone is to be recognized as the visible body of the Gurus. 'The Sikh who wishes to meet me (says Guru Gobind Singh) should seek me therein'. The Guru has also written: "The Word is the Guru, the Guru is the Word. In the Word are all elixirs. Whatever the Word commands, disciple should obey, and verily the Guru will emancipate him (46)

There could be no more frank, honest and truthful statements of the faith and beliefs of Baba Ram Singh than those recorded by him in his own letters, popularly known amongst the Kukas as Hukamname, written from his exile to his brother and prominent followers. Copies of a number of them were received from Sri Baba Partap Singhji by Kaviraj Sant Tehal Singh of Deska, district Sialkot, who published a selection there from under the title of Hukamname, with an introduction by Giani Sher Singh, Managing Director, the Sikh Sewak, Amritsar.