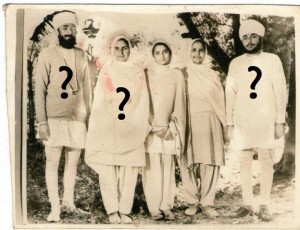 Satguru in the Sikh tradition chose his successor (next physical form)when alive and openly announced the successor to the Sangat.  Where possible, the next form of the Satguru was placed on the throne of Guruship and the previous form bowed to him.  This has been the tradition of Sri Guru Nanak.

It is an established fact that “Satguru” Jagjeet Singh did not leave a successor.  He did not announce the next Namdhari leader to the sangat nor did he write about it.  In fact, he spent his final 25 days on a ventilator, without any communication.  His death left the Namdhari sangat shocked and confused.

After the death of Baba Jagjeet Singh, there was turmoil amongst the Namdhari Sangat as previous leaders had left no doubt who their successor would be.  At the final rites and cremation of Baba Jagjeet Singh, it was announced by H.S. Hanspal, president of the Namdhari Darbar, announced Thakur Uday Singh would be the “officiating administrator” on behalf of  Mata Chand Kaur.  This clearly established that no successor had yet been chosen or finalized.

A week later, it was announced that Thakur Uday Singh would now be the next “Satguru”.  This was of concern to many Namdharis as Thakur Uday Singh is known as a good businessman but did not follow such practices as sodh, etc.

At any rate, Thakur Dalip Singh rejected this and said he was not worthy of the position.  He declared that the next Satguru would be Mata Chand Kaur and bowed before her picture and asked her name to be recited in the Namdhari Ardas.  It would be unheard of that a true “Satguru” would deny being one and turn the sangat to someone else.

Mata Chand Kaur however has announced in a press conference that her choice for Satguru is Uday Singh.

All this of course ignores the main fact:  A Satguru can make a Sangat.  The Sangat can NEVER make a Satguru.  Only a Satguru can choose which form to take next.

So in the absence of any choice by “Satguru” Jagjeet Singh, how can the Namdharis claim to have any successor at all?  And who gave the Namdhari administrators and ‘leaders’ the power to select a “Satguru”.

As a result of all this, the Namdhari Samparda has splintered into various groups, some believing in one “Satguru” and others in another.  Some believe that now only Baba Ram Singh will return to lead them and there is no interim leader.  These divisions have further even resulted in violent clashes.

We hope our Namdhari brothers and sisters can see just how misguided this process has been and how it has no basis in Sikh traditions or frankly, even Namdhari tradition.

The only true and eternal Satguru can be Satguru Granth Sahib.  About this there is no confusion or doubt.