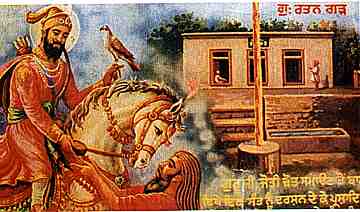 In order to give credibility to the distorted version of history, Namdharis often claim that the very proof of Guru Sahib not dying a physical death is proven by the alleged fact that He was seen by a wood cutter and as ascetic after the cremation had taken place. Therefore, it becomes pertinent to take a closer look at the sources that mention these events and ascertain if they hold anything that remotely adds any weight to the Namdhari argument.

The first source to mention any event related to Guru Sahib’s life after the cremation is Parchian Sewa Das, written by an Udasi ascetic. According to the date mentioned in the manuscript preserved in the Panjab University, Lahore, it was written in 1798 Bikrami, 1741 A.D., while the manuscript in the Central State Library Patiala, bears 1896 Bikrami, 1839 A.D., as the date of its transcription. Sewa Das tells in his work that the Guru had his funeral pyre prepared under his own supervision. He mounted it fully dressed and armed, sat on it cross-legged and that his light blended with the Divine Light – joti meh jot samane….After pouring plenty of ghee thereon, the pyre was set alight…When the pyre was all reduced to ashes, they found no trace of the dead body or of the Guru’s arms. All then so thought that the Guru Baba had gone (to heaven) bodily.

This is the first time, after 33 years of Guru Sahib’s demise that a mention of Guru Sahib’s body disappearing without leaving any trace. In order to prove that the Guru can never die, Sewa Das gives a mystical explanation to the event by stating that Guru Sahib simply disappeared. However, this does not at all prove that he escaped out of his own funeral through a different route leaving the entire Sikh nation under the delusion of his demise. Further, it does not prove that Guru Sahib continued his physical life afterwards since the account clearly mentions Guru Sahib going to heavenly abode. Historical sources also mention Guru Nanak Sahib’s physical body disappearing without leaving any trace but it does not change the fact that the guruship had been bestowed upon Guru Angad Dev Ji. Similarly, Sewa Das does not negate the fact that the guruship had been bestowed to the Shabad enshrined in Guru Granth Sahib. Sewa Das describes that Sikhs cried during the cremation and looked through the ashes afterwards but they did not find anything. It was a moral lesson to Sikhs not to attach any significance or importance to the physical body which was never the Guru to begin with. Also, disappearance of physical body is symbolical affirmation of Shabad being the Guru. Namdharis apparently fail to understand this fact and concoct stories to fancy their imagination and resort to pure conjectures.

Second source is Gurbilas Patshahi 10 by Koer Singh. It mentions on page 269-70 (edited by Ashok) that when Sikhs sorted through the ashes, only a small sword was found. Seeing this all Sikhs drowned in sorrow. At that time, an ascetic appeared on the scene and told that he had met Guru Sahib in full dress on horseback and had come to convey the message not to mourn and stay in exalted spirit. This story does not prove the Namdhari myth as true due to the fact that the author makes no mention of Guru Sahib leaving in disguise as Ajapal Singh. On the contrary, the author makes it clear as explained in the last section that the guruship was passed on to the Guru Granth Sahib. The author further claims that after the cremation many angels and gods from heaven came to receive Guru Sahib which proves that physical life of Guru Sahib had come to an end. Also, according to the source, the ascetic had vision of Guru Sahib on the fourth day rather than the same day or the following morning.

Third source is Gurbilas by Sukha Singh completed near the end of 18th century. Relying on previous historical accounts, Sukha Singh has taken liberty to add some fictitious stories. He has also given the demise year as 1693 which is wholly incorrect. Describing the last days of Guru Sahib, he mentions after the cremation nothing from the heap of ashes was found and an ascetic met Guru Sahib the next morning as opposed to fourth day as described by Koer Singh. After completion of his work, he has added another chapter which he calls “superfluous” describing how Guru Sahib liberates two Marathas from the prison of fort SItara. However, the names of two prisoners, Bala Rai and Rustam Rai, are purely conjecture and not found in any Maratha historical work and thus, the event remains unverified by objective Maratha historians. What blows Namdhari myth is the fact that the same source mentions Guru Sahib entrusting the Sikhs to the care and protection of God and instructing them to read Gurbani from the pothi (Scripture) of Das Mahal (Ten Gurus).

Sooraj Parkash completed in 1843 by Kavi Santokh Singh is another source that mentions Guru Sahib meeting a wood cutter and an ascetic after the cremation. This is not any different than repeating the same folklore of Koer Singh and Sukha Singh. However, the author just like all others does not support any of the Namdhari myths. Unlike all other authors, he mentions Guru Harkrishan Ji instructing Sikhs to have faith in Gurbani like Guru. In his narrative, Guru Harkrishan Ji states:

Sooraj Parkash in Raas 10 Ansu 55, No. 20-23 also mentions that at the time of passing guruship to the 9th Guru, Guru Harkrishan Ji respectfully opened Guru Granth Sahib and bowed to it. This leaves no doubt that the author was a firm believer in the guruship of Guru Granth Sahib.

The last Sikh source mentioning the legends after the cremation event is Panth Parkash by Giani Gian Singh. Despite what Namdharis may claim, the source does not provide them with anything to back up their fallacious statements. Giani Gian Singh not only mentions installation of Guru Granth Sahib as the Guru (as shown in last section) but also makes it clear that the Sikhs had full faith in the demise of Guru Sahib for despite the claim of the ascetic having met Guru Sahib, the Sikhs performed the Bhog ceremony of the Guru Granth Sahib on the tenth day of Guru’s demise. This part of the event has remained the same throughout all editions of Panth Parkash whereas the mythical legends of Guru Sahib meeting a wood cutter and an ascetic have been expunged in 6th edition by the author himself.

It appears that due to the awakening of the Sikh masses and interest in having objective historic accounts of the lives of the Gurus in the early 20th century, Giani Gian Singh realized his mistake of copying events from old historic books without any scrutiny and decided to rectify his work to correctly describe the historic events. This is evident from the fact that Twarikh Guru Khalsa written by the same author makes no mention of mythical legends attached to Guru Sahib’s life after cremation while clearly mentioning Guru Sahib giving guruship to Guru Granth Sahib. He mentions:

To summarize, all the sources that attach legends to Guru Sahib’s life make no mention of Him escaping and living in disguise or refute the authority of Gurbani as Guru. These sources also do not state that in the mythical legends, Guru Sahib was alive as in flesh and blood. His vision is never described as the vision of physical body but rather of mystical nature. Therefore, it is proven beyond the doubt that the guruship of Guru Granth Sahib remains irrefuted and Namdhari stories as mythical, fictitious and purely imaginary.

As has been discussed in the article, all contemporary, semi-contemporary and 19th century accounts describe the event of passing of Guru Sahib as historically factual.